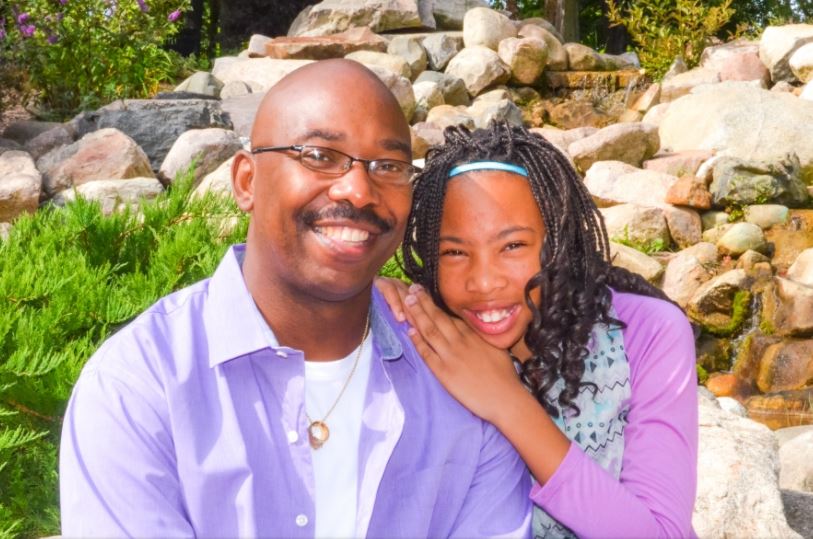 It’s been two years since Keisha Brown died after battling breast cancer for almost a decade. Her husband, Damon, smiles when he talks about her. Her presence is still with him, he said, guiding Damon and their daughter through each day.

“I still hear her voice telling me what to do. Keisha was just an amazing woman,” he said. “No matter what I’m going through, I just remember she fought every day.”

Damon serves as the director for Student Activities and Involvement. He works closely with student organizations such as Program Board and helps to facilitate campus events such as Mainstage. When his wife fell ill with her first diagnosis, the campus community rallied around them.

Several months before receiving her diagnosis, Keisha gave birth to a baby girl. The pregnancy was a pleasant surprise for the couple, who had believed they couldn’t conceive a child. They named her Angel, believing her to be a blessing in their lives.

When Keisha began experiencing chest pains, later to be told it was breast cancer, her thoughts immediately went to her infant daughter. It was from that moment of heartbreak the Angel Wings charity formed.

The organization is dedicated to financially aiding children whose lives have been affected by cancer. To date, the charity has raised more than $150,000 for families battling cancer.

This year is the organization’s 10th anniversary. It’s a milestone, Damon said. He continues to be amazed by the support Angel Wings has received by Central Michigan University staff and students and the Mount Pleasant
community.

Damon believes students not affected by cancer can learn something from their family’s story. Keisha would be proud of the strides made in the community she spends so much time in, he said.

“I would challenge students that no matter what you’re facing in life, you control that. Live your life to the fullest each and every day,” Damon said. “You control your life. Cancer doesn’t control you.”

In a single decade Angel Wings has grown from an idea to endowing students affected by cancer with academic scholarships.

By the end of this academic year, Damon hopes to have scholarships set up at Central Michigan University and Alma College. A third was established at Mount Pleasant’s Sacred Heart Academy this past June. Damon requested the dollar amount be kept a secret for the collegiate scholarships until the first one is awarded.

Damon remembers a time when, prior to being able to raise funds, offering scholastic aid through Angel Wings was just a dream.

“For the last 10 years, the organization has just been raising funds,” he said. “Over the past three years, we’ve really been able to build some structure to Angel Wings and do some great fundraising.”

The money was raised through small fundraisers like community bowling and a Pink Gala — an event held in Keisha’s honor celebrating her love for dance.

When Angel Wings was chosen as Greek Week’s focus in 2015, Damon said he was overwhelmed by the show of support. More than $50,000 was raised for Angel Wings from the event, he said, which continues to help children today.

The night emotionally touched Damon through more than just the donations. When the different chapters performed their Mock Rock dances, each group incorporated something to do with Keisha or Angel Wings into their songs. Damon said he wasn’t sure if the students were even aware of how much of Keisha’s spirit was present within each performance, or how much it meant to him.

“For me not having any prior conversations with any groups about Keisha’s passions, it was really powerful,” Damon said. “I don’t know how they would have known, but to see that, it was just one of the greatest things. It was so creative and classy.”

Kaylee Bloom, last year’s Program Board president and a 2015 alumna, remembered when her organization worked with Angel Wings to put together a bowling fundraiser and silent auction.

She said the ability to help out, even in the smallest way, was “really impactful.”

“Damon is one of my mentors,” Bloom said. “The fact (Damon) was able to share his story and the awareness portion with students across campus was important for me to have a part in, being close to him through Program Board.”

Although she no longer lives in Michigan, working as an assistant resident director at Syracuse University, Bloom said she still keeps her eyes and ears open for news about Angel Wings.

“I wish I could still be a part of working with the organization,” she said. “I hope through the work Damon is doing, more kids who have lost a parent to cancer are able to get the funding they need to pursue whatever their dreams are.”

When Damon looks to the future of Angel Wings, he sees an organization not just CMU oriented, but one that benefits all of Mid-Michigan.

His goal for the next 10 years is to eventually have Angel Wings expand and cover cost of living situations for families stricken by cancer. If the organization can provide gift cards for things like groceries and school supplies, Damon said he’ll be happy.

Sharing Keisha’s story helps keep her memory alive. It would be something that she would want, he said.

“I want to be able to use my voice to help people going through similar situations,” Brown said. “I see myself doing more speaking on college campuses about cancer and how it affects a family using our story.”

Lake City junior Crystal Pendergrass is one of two students serving on Angel Wings’ Board of Directors.

She said being a part of this organization since her sophomore year is a “humbling and life changing experience.”

“To know we’re helping students who have suffered from cancer or the of lost a parent from cancer, it blows my mind and opens my heart,” she said. “Angel Wings has become a part of who I am and what I do. My heart is so much bigger because Damon and Angel have entered it.”

Pendergrass plans to stay on the board until she graduates. Her hopes, much like Damon’s, is to have the organization expand to other universities. While nothing is set in stone in terms of expansion, with “so many students needing the help (Angel Wings is) providing,” she is positive “something will happen soon.”

How soon expansion happens, Pendergrass said, is a matter of perseverance and community assistance.

Though no one can predict the future, Damon said he and 11-year-old Angel are passionate about what parts of Keisha’s dreams can be realized next.

“Angel Wings keeps my wife close to me. That’s why I’m very passionate about it,” Brown said. “The opportunity to do things with the organization, something she was so passionate about, it makes Keisha and I that much closer. Even though she’s not here anymore, I still feel her presence every time I’m working on something for Angel Wings.”

(This article was written by Jordan Hermani and was originally found here: http://www.cm-life.com/article/2016/10/angel-wings-10-years-later)