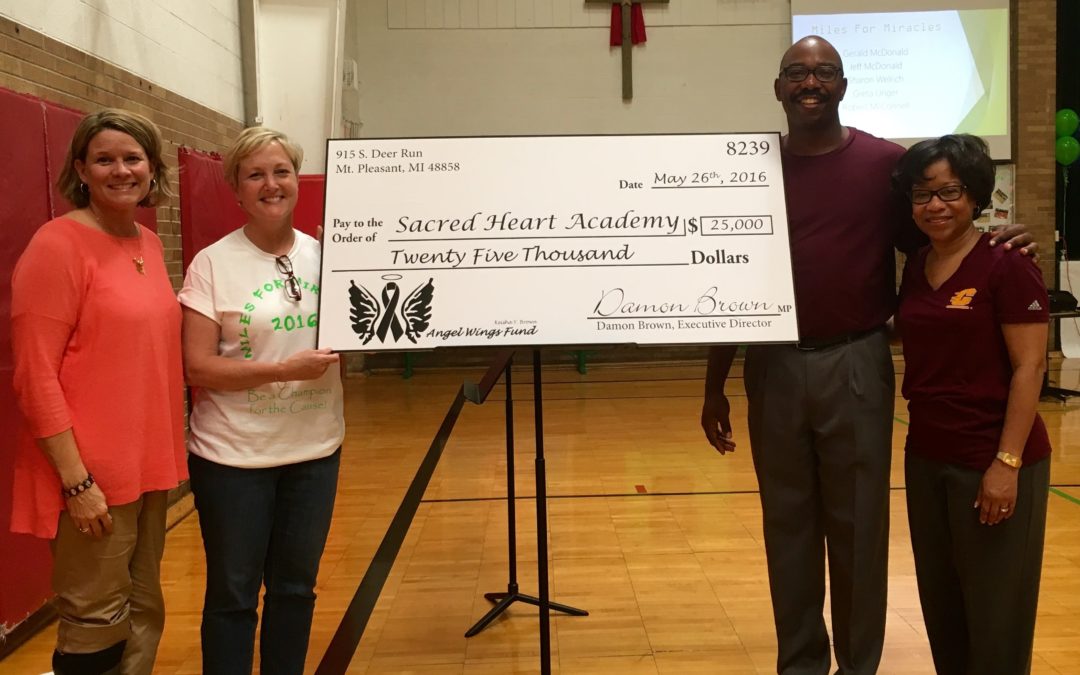 Keisha Brown’s death two years ago at age 42 likely still stings for her family and the many students she mentored at Sacred Heart Academy and Alma College.

Known for her own talents at Tulane University on the basketball court, and later as a coach at Sacred Heart and Alma, she was also a motivational speaker after being diagnosed with breast cancer in 2007.

Prior to her death after battling the disease for seven years, Brown and husband Damon established the Angel Wings Fund, named for her daughter to create scholarships for children who have lost a parent to cancer.

Now, the Keisha Y. Brown Angel Wings Fund, under the watchful direction of Damon Brown, has gone a step further.

A charity that supports people and families affected by cancer, the Keisha Y. Brown Angel Wings Fund has established a scholarship in memory of its founder and namesake.

Interest from the fund will provide tuition assistance to middle and high school students or families at Sacred Heart Academy.

Keisha Brown was a teacher, counselor, administrator, and coach at Sacred Heart Academy, mentoring hundreds of students throughout eight years of service before her death.

The breast cancer diagnosis did not stop her from fulfilling her dreams of becoming a mother, coaching state-championship level and collegiate-level basketball teams, and being a life-coach and keynote speaker for countless students, student organizations and fellow cancer patients.

She and Damon created the Angel Wings Fund to ensure families affected by cancer did not have to give up their dream of education and betterment for their children.

“By establishing the Keisha Y. Brown Angel Wings Scholarship, Keisha’s legacy of education and faith lives on in perpetuity,” Damon said, adding that the directors of the Angel Wings Fund were pleased to make this investment in the SHA Foundation.

The SHA Foundation is an endowment in which the principal is never spent; only the interest is used for the designated purpose.

In this case, Damon said, there are scholarship criteria and preferences to award the interest each year and help deserving families.

Bill Myler, president of the SHA Foundation, said the organization is honored to accept the investment and create a fund in memory of Keisha Brown. “Our number one goal is to help with operations of the school, but in recent years we have created several scholarship funds which benefit tuition assistance, which helps keep Catholic education affordable for local families,” Myler said. “This is important to our mission.”