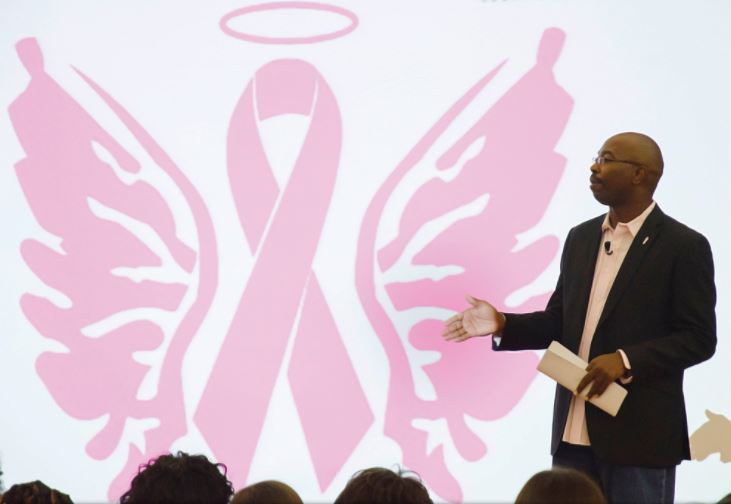 After telling the story of his wife’s battle with cancer, Damon Brown, director of Student Activities and Involvement, received a standing ovation as the guest speaker for Central Michigan University’s 2015 Greek Week.

Brown’s wife is the founder of the Angel Wings Fund, a local fund Greek Week is sponsoring this year. He fired up the Greek community about the purpose of supporting Angel Wings.

“I am always amazed by the passion and drive that our Greek community has to serve others,” Brown said. “Do you realize over the past three years the CMU Greek community has raised over $80,000 during Greek Week alone? I am so proud that our community can come together and have such an impact on the lives of others in just one week.”

Brown said Angel Wings was started by his wife because she wanted to help children achieve their dreams, just like their daughter Angel Brown. The foundation provides college scholarships to children who have lost a parent to cancer.

Danielle McIlrath said Brown’s message refocused her on the purpose of Greek Week.

“Friendly competition is fun, and it is fun seeing all of the Greeks about, but our purpose this week is to help this foundation,” said the Olivet sophomore.

Keisha Brown loved basketball, and after a successful professional career in Finland she coached at the high school the collegiate level. A group she affectionately called her “boys” was the junior varsity Sacred Heart basketball team of 2002 and 2003.

Brown was diagnosed with cancer for the first time in 2007 and was diagnosed again three more times before it claimed her life in April 2014. Brown’s urged students to emulate Keisha Brown and tell their own stories, leaving a worthy legacy behind.

“Each of you has the opportunity to share your own story, don’t wait for somebody else to tell it for you,” Brown said. “I can guarantee you you won’t like the outcome.”

Chase McGill said what touched him the most was Keisha Brown’s life story.

“The struggles she went through is definitely what is inspiring, and through it all she put her faith first,” said the Olivet freshman.

The night wrapped up with applause and announcements before Greek life students left to practice for the mock rock. With two days left of money wars, it was announced that loose change is allowed for the remainder of that portion of the fundraiser so that as much money as possible can be raised.

While onstage, Chicago junior Brighton Ferris said her hope for the week ahead.

“While we are deciding what our legacy is going to be, let’s (come) together and make this Greek Week the best one we have had so far,” Ferris said.

(This article was written by Emily DeRuiter and was originally found here: http://www.cm-life.com/article/2015/04/greek-week-angel-wings-2015)