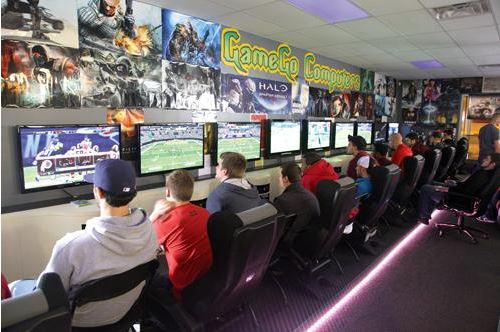 Music filled the air and neon lights lined the floors as students and community members filled GameGo Computers and competed in a video game tournament for charity.

Setting a goal of $5,000 in donations, students from the sport management program partnered with the Angel Wings Fund to raise cancer awareness within the community. The groups hosted a twelve-round Madden football tournament.

By 7 p.m. Sunday, the tournament raised $2,350 according to the event’s “gofundme” account.

Angel Wings is a charity with the goal of providing scholarships to children whose parents have lost their fight with cancer.

Rogers City senior and fundraiser coordinator Chase McLennan was happy with the attendance.

“(The) turnout was great, we have most of our people here,” McLennan said. “A few people couldn’t make it, but it ended up being a great turnout and everybody seems to be having a great time, no complaints.”

More than 50 people packed the GameGo Computers store in an effort to bid for the title of “Madden Champion” and the $100 prize.

The storefront boasted more than 20 televisions and monitors, with the same number of gaming consoles for the event.

“I own the place and the guys came and talked to me about sponsoring. I told them I could offer my facility to host the event,” said Ian Walters, owner and operator of GameGo computers. “It’s good to help people in need of something. I did not get here on my own, people helped me, so I don’t mind giving back to help.”

For those who were eliminated early on, the event was well-supplied with food, drinks and tailgating games to keep guests entertained as long as they wanted, as well as numerous live raffles, with prizes from sponsors.

“It’s a little embarrassing (to be eliminated), it’s for a good cause though, and it’s all about the fun,” said Saginaw senior Cody Williams, who was one of the lucky raffle winners.

CMU women’s basketball star Crystal Bradford did her part with the event as well.

Whether this event will continue in the future is unknown, but the experience is something the coordinators would love to pass on.

“While you might not have the most when it comes to numbers or revenue, learning how to put everything together, that’s the big process of what you want to take away from everything,” said Mackinaw Island senior and coordinator Michael Green. “That’s what we want to pass on to other people, not just how to make money, but also to throw a good event, a quality event.”

(This article was written by Jake Schmittler and was originally found here: http://www.cm-life.com/article/2014/04/madden-tournament-raises-more-than-2000-for-angel-wings-fund)