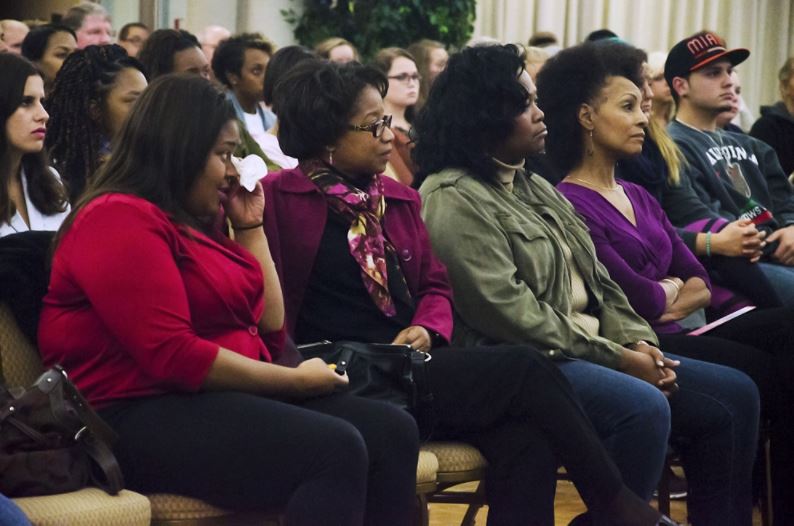 In the two hours Damon Brown spent Monday intimately relieving his wife’s seven-year fight against breast cancer, he dropped his smile only once.

Keisha Brown was a 33-year-old mother of one when she was diagnosed with cancer in her right breast. She died April 10, after beating the disease four times, undergoing extensive chemotherapy, surgeries and a double mastectomy.

“My world stopped. The person I was meant to spend the rest of my life with is gone,” Brown said, his voice cracking for the first time that night.

His sorrow quickly turned back to a resigned peacefulness as he continued. The director of the Office of Student Activities and Involvement recounted his family’s fight with the illness at a presentation called “I’m Gonna Love You Through it,” at the Bovee University Center Rotunda.

“As much as I love my wife, as much as I love her now, if she is back she’s still in pain,” Brown said. “That means she is still suffering. That is not a Keisha I want.”

Time and time again, Brown spoke of how his wife gave him strength throughout her battle with cancer. He talked about how she had a fierce connection with anyone she met, how she playfully rebuffed his early advances and their happiness after conceiving their daughter Angel, despite being told by doctors Keisha was infertile.

Keisha was a source of strength for her family, refusing to succumb to despair after the cancer returned again and again.

The disease is an old enemy of Brown’s; his mother was taken by cancer when he was 18-years-old. He described the raw anger and confusion he felt at losing two of the most important women in his life to the disease.

Keisha wouldn’t let him dwell on that for long. After she was diagnosed the first time, Brown said he felt as helpless as he was as a teenager.

Keisha never gave up on her life. She coached Sacred Heart Academy boys’ basketball from 2003-09 and led the Irish to five straight conference titles, four district championships, three regional crowns and a runner-up showing in Class D in 2006. In addition, she served as a principal and athletic director, all while battling the cancer as it worked its way into her bone marrow.

Her story lives on in a documentary Brown shared at the event, allowing Keisha to address through a recording to the crowd directly after her passing.

“I’m stronger because of cancer,” she told the audience in the video. “I laugh a lot more. There’s a poem about there about what cancer cannot do. It cannot take your joy, it cannot steal your spirit; cancer can do so many wonderful things. It brings families together, it brings enemies together.”

The Browns’ story was one of hope in insurmountable circumstances.

Even at the end, when Brown had to tell his wife she was days away from death, he said Keisha didn’t shed a tear. In her final moments, she said she was ready to go home, finally able to rest after years of fighting.

Brown carries on her legacy in the Angel Wings Foundation, a breast cancer charity named after their daughter. This wasn’t the only legacy he wanted to leave with CMU.

“To students: live your life. Life flies by so fast,” Brown said. “Take advantage of each and every day, value your friendships. Keisha lived her life as if she couldn’t lose and that is the one thing I share with you.”

(This article was written by Malachi Barrett and was originally found here: http://www.cm-life.com/article/2014/10/angel-wings)